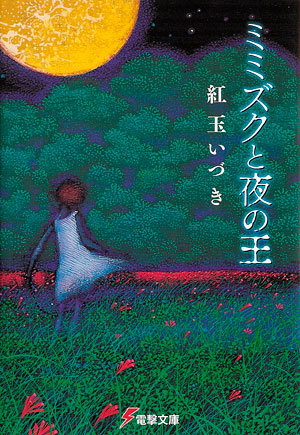 What constitutes a light novel? It’s a question you have to ask yourself when reading Mimizuku to Yoru no Ou, because there’s no hint of manga style on the cover, and the inside of the book has no illustrations at all. It is, however, published by a light novel label, and Wikipedia has it classified as such, so who am I to argue? Either way, the novel is a wonderful literary work, light or not.

This is the author’s first book, with two more released over the years since its release, despite the fact that she’s still only in her mid-twenties. She’s also dabbled in scenario writing, contributing to titles like Hikari no 4 Senshi: Final Fantasy Gaiden, which is to be released later this year. Maybe it’s finally time to buy one of those Nintendo DS gizmos.

Mimizuku to Yoru no Ou is the story of an insane little girl in chains who wanders into the Forest of Night, with the intention to meet the King of Night — the ruler of demons — and persuade him to eat her.

The book is beautifully written, with crisp and concise sentences that sweep you away to its magical world instantly. It tastes distinctly of fairy-tale, but dark and mysterious, much like Neil Gaiman’s work. It’s kept simple, yet elegant. The way Kougyoku uses commas and periods to shape the flow of words works incredibly well to convey the notion that the main character is quite mad, further enhanced by drawing out the final syllable in each of her spoken lines. It creates an eerie mood, which is utterly bewitching and otherworldly. I do wonder how it could be reproduced in a language like English, though. It’s hard to imagine reading an extended “you” without being irritated rather than charmed.

I wish I could end the entry with nothing but praise, but the story changes midway through, with a move into a different atmosphere altogether, and the consequence is a loss of much of what I found so captivating initially. That isn’t to say it goes bad, but the fascinating magic feeling is taken away, and the plot resolution that follows is overly nice and quaint. And, perhaps, too predictable. It remains a lovely read with an adorable heroine, but I saw potential for something glorious in that first half of the novel.