Today I have the privilege of bringing a new PV to your attention (read: made to do). The ending single for the popular supernatural series Bakemonogatari, “Kimi no Shiranai Monogatari” (Your Unknown Story), was released today and along with it, the PV for the song.

Prior to hearing this song, I didn’t know anything about supercell. Even now, I still claim to know nothing except for the fact that they’re a unit comprised of Nico Nico Douga creators/performers. Centered around their composer “ryo”, who was responsible for a bunch of popular Hatsune Miku songs, and their vocalist “Gazelle” a.k.a. “nagi”, who was supposedly a really famous Nico Nico Douga singer before deciding to “retire” from the scene, supercell makes me wonder if the likes of Hollywood would ever look to YouTube to find amateur artists to perform the theme song for their next blockbuster hit. Hella unlikely I bet. However, this does go to show how you can make it big via online videos in Japan.

Being the “Internet people” that they are, apparently many of the members haven’t made any TV appearances yet. As such, it still remains a mystery as to how some of them look. According to Patrik, maybe they’re “ugly” and don’t want people to be turned away from their music based on how they look. We jest, but I’m inclined to think that way since people tend to be pretty shallow in showbiz. In any case, this probably explains why the PV features good looking actors/actresses in a story-like setting. Even if this kind of PV isn’t your thing, listening to the song alone makes it worth the watch.

Summary:
Koyomi is followed on his way home from school by Mayoi, and when she asks, he tells her about his plans later to study with Hitagi for the upcoming placement tests. 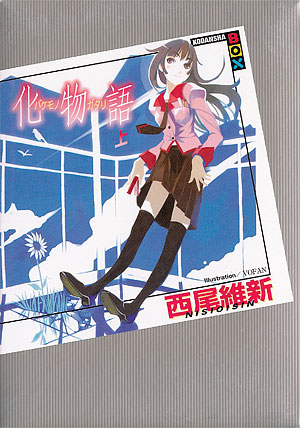 Summary:
While Hitagi is gone, Mayoi and Koyomi talk about how he used to be a good boy who ended up struggling in high school and felt like he’d never grow up.

Summary:
Hitagi, Koyomi, and Mayoi have started to look for the address that Mayoi is trying to reach, and they pass the area that Hitagi used to live.

Summary:
It is Mother’s Day, but Koyomi finds himself alone at the park instead of at home.

Summary:
Oshino sends Hitagi home to get cleaned up before he can help her, and she ends up telling Koyomi about how her mother got involved with a suspicious religion.

Summary:
At school one day, Araragi Koyomi sees a girl falling down the staircase and manages to catch her.