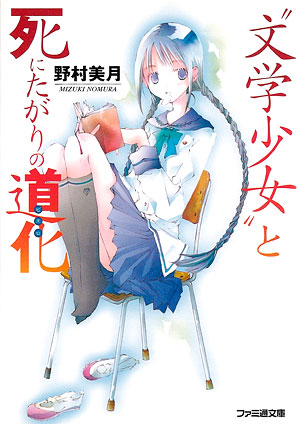 This is a mystery novel. It was okay.

There, that should take care of the reader requests.

With the possible exception of Haruhi, no light novel has been hyped like Bungaku Shoujo: forum posts praise it, 2ch threads list it as the best series ever, and the glorious Kono Light Novel ga Sugoi! ranking saw the title rise from #8 to #3, to the coveted #1 last year, spanking my precious Toradora!. In other words, something out of the ordinary ought to be on display in this latest series by author Nomura Mizuki, who debuted way back in 2002 with some sort of vocal ping pong priestess amalgamation I’ve never heard of. The illustrator assigned to liven it up is Takeoka Miho, who uses watercolours to create a sweet, dreamy, and absolutely delightful mood in her imagery. Faces don’t always seem to be the right shape, but there’s a sense of nostalgia in the drawings that seeps right into your soul.

As a former best-selling genius girl writer beauty, main character Inoue Konoha at least manages to be rather unusual. Having achieved absurd success with his first novel at age 14, he suffered a nervous breakdown after a certain event and vowed never to write another book. Now he’s peacefully whiling away his youth as a second year high schooler at Seijou Academy and member of the illustrious literary club, after being dragged into it by third year student Amano Tooko, the club president and only other representative, and also the series’ second main character. To mix things up a bit, there’s a third recurring character – Kotobuki Nanase – who is Konoha’s tsundere classmate and possible romantic interest (if she stops hating him).

Let’s take a break here, and look at the cover (top left). This is Tooko. Notice her mouth? That’s a piece of paper hanging out. She’s munching on stories, you see, because she happens to be a “bungaku shoujo” (Literature Girl), a youkai that feeds on the written word. Regular food carries no taste for her, and instead she enjoys the sweetness in a love story, or gags at the bitterness of a tragic death ending. To keep her with a fresh supply of snacks, Konoha has to write short stories for her daily, followed by her rather colourful impressions while she tears the paper into strips and puts them into her mouth.

Hoping to vary her diet, Tooko comes up with the idea to lure innocent girls into writing essays on their love life, by helping them fall in love in the first place. A clumsy, cheerful first year student named Takeda Chia takes the bait, and Konoha is conscripted to write a love letter in her name. Chia comes back praising its success, and asks him to write a new letter every day, so she can deepen the relationship with her beloved Takaoka-senpai. Reluctantly Konoha agrees, but eventually something happens that makes him feel a need to meet the guy in person. Konoha asks friends, checks the student register, visits the archery club where he’s supposed to be a member, but Takaoka is nowhere to be found. Instead there are rumours that Chia is dating another first year student, and Konoha grows suspicious.

Each volume in the series is seemingly built around a classic work of fiction. This first book follows Dazai Osamu‘s Ningen Shikkaku, and had I actually read that, I might be able to give a more insightful review, but no such luck. Bungaku Shoujo is interspersed with bold text sequences, recounting letters from someone who is morbidly fascinated with Ningen Shikkaku. As such, the theme of the book becomes the overwhelming feeling of not being quite human; of not understanding grief and joy like a regular person, and the anguish of covering it up with a mask. This creates an interesting mix in Bungaku Shoujo, between the mellow atmosphere generated by Tooko and Konoha, and the dark, severe nature of the bold text’s mystery. 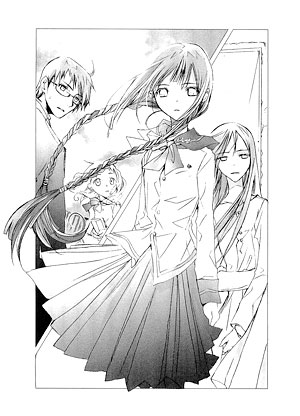 Unfortunately, the mystery isn’t handled very well. I’m an enormous fan of the genre, having read dozens of Poirot and Miss Marple novels by Agatha Christie, and more recently loving the marvellous Kubikiri Cycle light novel by Nishio Ishin. In most mystery novels, it is the deriddling that takes centre stage, with the search for clues, the construction of theories, the skilful pressing of suspects through clever dialogue. In Bungaku Shoujo, none of that has any place. The mystery here is just a plot device to display Tooko’s love for literature. There’s a section in the middle where part of the mystery is revealed, and it’s a long line of unprovoked confessions where characters just fall over each other trying to explain everything to the smallest detail. It’s not the enigma’s resolution that matters, but Tooko’s persuasion of the perpetrator through a verbose account of how wonderful a particular author is.

It’s just too bloody convenient. A final twist appears, and it does hit home nicely, but again it’s concluded in an overly simplistic manner, and the air just fizzles out. Bungaku Shoujo also has the honour of being the very first written work where an excessive use of girlish expressions has me irritated. Normally a writer will dot the dialogue with cute ending particles like “wa” and “no” to create the sense of a feminine character, but here it floods the page as though Tooko found a whole box of the damned things in the bargain bin. The author also abuses the ~ symbol to create long, whining lines that really grated on my mind. All things in moderation, if you please.

There are good things to find in this series, though: the relationship between the main characters is pleasant to watch as it unfolds with great chemistry, and it was the desire to see where they go from here that made me order the rest of the volumes in one go. Nomura also manages to implant the urge to read Just One More Page, which helps the reader sail through the novel in a surprisingly short time. Perhaps in vain, I’m also hoping the next story will be better put together, giving me at least the hint of a puzzle I can solve myself, instead of just observe passively.

For those of you who think it’s tiresome to read lots of words, there’s also a manga adaptation of the first book being published, and there’s an anime movie in the works by Production I.G.