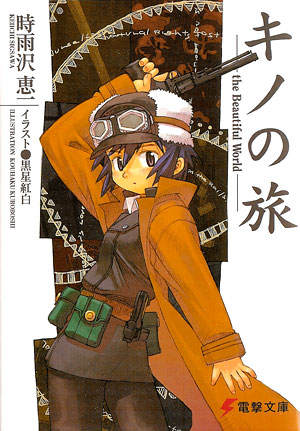 Nearly ten years old, with six million units sold over 12 volumes and an anime adaptation in 2003, the Kino no Tabi series is one of the few light novels that have been published in English. It’s the debut title by author Shigusawa Keiichi, and was first published chapter by chapter in a magazine called Dengeki hp. When these were collected and put into paperback form, an extra chapter was added, along with the illustrations by Kuroboshi Kouhaku. These two fellows also went on to work together on the light novel series Allison and Lilia & Treize, which had an anime adaptation just last year.

Kino no Tabi chronicles the traveller and companion combo Kino and Hermes, with the latter being a talking moped. This first novel consists of six chapters with haphazard chronology, which the author assures us can be read in any order we please. Each chapter depicts Kino and Hermes’ encounters with different city nations, in a visit that according to Kino’s rule may only last three days, as this should be enough to learn what kind of place it is, while also making it possible to visit a multitude of destinations.

The episodic nature makes for a somewhat disjointed reading experience, but allows the reader to lightly sample a wide variety of ideas without driving them into the ground. The first two short stories are fairly similar in that Kino arrives at a city to find it completely empty of people. After roaming the streets and spending a day or two trying to figure out where everybody went, our protagonist eventually meets a lone inhabitant and is told of the nation’s fate. Both these cases bring up interesting concepts – mind-reading and absolute democracy – and it is fascinating to learn what happened. Yet at the same time, these specific cases are very extreme, and it’s hard to imagine any society reasonably going so far. The third story about three lifelong workers is similarly drastic, and I was left with the feeling that although the ideas are thought-provoking, the setting given was perhaps a bit too simplistic.

While the first three chapters have Kino acting very much the hands-off observer, this premise changes in the fourth story, named “Colosseum / The Avengers”. Here Kino unwittingly stumbles into a tournament where the winner becomes a citizen, and the losers all generally die unless the opponent allows them to surrender. A guard, who informs Kino of this peculiar law established by the newest king, laughingly mentions a married couple forced to participate some time ago, where the wife was lucky to be able to surrender to her husband as first opponent, but then the husband was killed in the subsequent duel. Hearing this, Kino decides to make a difference. What follows is a series of fun to read duels, with a surprisingly gory climax. As Kino leaves the town behind, Hermes points out the similarities to a young couple they met on their journey, who spoke of going to a splendid country. As Kino nods in assent, Hermes continues, explaining how they later met only the wife, and that she told them with a smile that it was indeed a wonderful place, and that Kino should make sure to visit it sometime. Kino agrees that this is what happened, but doesn’t seem too happy about it.

From a rather slow, albeit interesting, start, this chapter raised my interest level a few notches, since it gave Kino a bit of flesh as a character. But what really knocked my socks off was the fifth story, “The Land of Adults / Natural Rights”. Unlike the other chapters, which all had third person perspective narration, this was done in first person, with a woman writing about an event in her past, where she met Kino. A number of things made this story stand out. First of all, it clears up the issue of Kino’s ambiguous gender, a fact that had been kept quite vague up until then. Second, the first person perspective is much more personal and emotionally involving than the distant, cold third person perspective used in the earlier stories, making it easier to feel sympathy for the characters. And third, the realization of who Kino is simply left me gaping when I realized what was about to happen. The sixth chapter goes back to regular third person narrative, however, but again it’s made clear whether Kino is male or female, which might have been the reason the chapters were ordered as they were in the book.

As I’ve already mentioned, most of the book is written in third person, with the reader unable to tell what Kino and Hermes are thinking. This is solved by letting the talking moped act as a sounding board to bring some thoughtful dialogue into the story. It also serves to emphasize that Kino is no more than an observer of the strange customs they run into, and the perfunctory writing describes the events in a strangely matter of fact manner, which along with the tempo creates a very unique, gloomy atmosphere. It’s not entirely displeasing, but I’m not sure it’s my cup of tea either. The lack of an overarching plot also means there’s nothing really pulling the reader into the next page, chapter, or book.

Some odd traces remain from the time it was published in a magazine: every chapter, the terms Persuader (note: firearm) and Motorad (note: two-wheeled ground vehicle) are explained with little notes, something that got on my nerves by the third time. I was also annoyed by the author’s apparent gun fetish, as gun maintenance is described in meticulous detail taking up entire pages at a time. Perhaps this has some connection to his pseudonym “Shigusawa” being a Japanification of the gun manufacturer SIG Sauer. Another thing that struck me as strange was how Hermes (Greek god) paraphrases Marie Antoinette’s (French queen) famous “Let them eat cake” quote, despite this seemingly being a different world from ours. Maybe it’s explained in later volumes.

I’d like to start comparing the novel to the anime adaptation right about now, but the fact is that I haven’t watched it (apart from a single episode years ago), so I’ll have to leave that to you in the comments section. It would also be nice if you could give some feedback on the format of this review. Was it too long? Too dull? Too little plot information? I’m worried about keeping it as spoiler free as possible, but I realize it will become a difficult issue to dance around when reviewing sequels. Regarding the lack of illustration shots, it’s because I can’t take photos of a page without getting my fingers in the shot, and if I squash it into the scanner I’ll ruin my precious book.