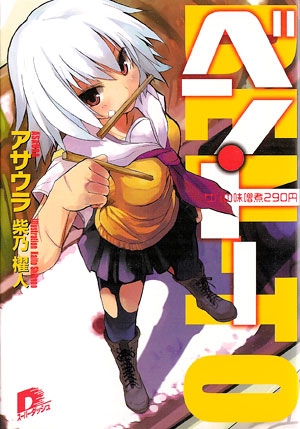 Let’s be frank, my friends. I read the first chapter of Ben-to, and I didn’t like it. The setting is completely bizarre; the “hero” is an asshole; supporting characters are weird; and the story gets repetitive. But did I give up? No, for I am one of mankind’s great readers. I struggled on, never letting go of Hope. If you persevere, God will reward your efforts.

The perpetrator behind this title calls himself Asaura, and previously wrote two novels called Kiiroi Hana no Aka and Vanilla – A sweet partner, which I have no clue about. His illustrating partner for Ben-to is Shibano Kaito, who seems to dabble with doujin production in addition to handling character design for the Nintendo DS game series Luminous Arc. Again, I am ignorant of any of these things, but since the game has music by Mitsuda Yasunori, I suppose I’m on the losing side. For this title, the colour work is very nicely done, while the monochrome illustrations appearing within the text are unusually rough.

Here’s the deal: this series is all about people who fight (punching-kicking-biting) to be one of the last standing, in order to claim a half-priced box lunch at the local supermarket. I mean it, that’s really the setting for Ben-to (which is a bit of a pun on bento, the true depth of which still eludes me).

The main character is Satou You, a young man who’s just moved away from his parental home to attend high school, and now he’s ensconced in a student dorm. The problem for our hero is that he’s only given a meagre 30 000 yen (~$300) per month to cover expenses, which can get tricky if you want to buy that favourite manga and keep supporting the creator. Normally this wouldn’t be too difficult, but Satou’s dorm only serves breakfast, so he has to buy lunch and dinner with his own money, because how could you expect boys to cook for themselves? Satou’s solution to this economic dilemma is to seek out a supermarket in the evening, when the clerk starts tagging box lunches with half-price stickers. Ah, the savings to be made! thinks Satou, and reaches out to grab some food.

Alas, Satou’s attempt ends with unconsciousness, and while sharing a paltry rice ball with a girl who saw what happened, he’s informed that the moment the half-priced stickers went on, the box lunch corner was transformed into a battlefield, with several unknowing participants like Satou getting blown away to the other side of the store. Coincidentally, this girl is a first year student at Karasuda High School just like Satou, and her name is Oshiroi Hana. A combination of hunger and curiosity brings Satou back into the supermarket the next evening, where he again meets Oshiroi, and the two eventually form a strange partnership. Once more Satou is hit by someone and passes out, and this process is repeated over and over, as Satou can’t quite figure out what is going on in this peculiar store. They often run into a beautiful, mysterious fighter nicknamed “the Frozen Witch”, who is rumoured to dominate the area.

One night, this grandmaster seems to have had enough of seeing them get smashed into a pulp, and she tries to persuade Oshiroi and Satou to stop interfering. When Satou refuses, she gives them a brief smile and tells them to visit room #502 in the school club building. With Satou’s entrance into the Half-Pricer Society, the story finally gets moving. Guided by the club president Yarizui Sen (pictured on the cover), Satou and Oshiroi learn the rules of half-priced box lunch battle. They face hazards like Storms, old ladies with trolleys, and come across the mythical Wizard, a former club president whose battle prowess is legendary. Gradually – finally – the setting begins to make sense, and the reader’s patience is rewarded.

Having started as a blob of repetitious incomprehensibility, Ben-to now opened my eyes to the fact that deep within was hidden an actual message, something meaningful to ponder. Like the reader, Satou’s character begins from the outside, looking in at a phenomenon he cannot possibly understand as anything but absurd. But as he joins in, and we with him, the unspoken laws that rule this world are revealed, and from chaos a genuinely intriguing order is built. Remarkably, what once seemed so bizarre now became reasonable to me. Moreover, the fighting is written in a very vivid and exciting manner, so it’s easy to feel like you take part in the action, once Satou stops being a punching bag and hits back instead. 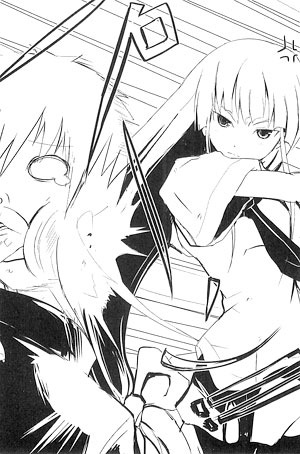 Another strong point of this title is the humour, which is quite dark and may not fit everyone. As if to explain to us just how much of a bastard Satou can be, there’s a short sequence relating how he moved his best friend’s clock back an hour in a feeble attempt to feel like he has some control over cruel, uncaring Time, which resulted in his friend coming an hour late for next morning’s final exams and as a consequence he failed to get into his preferred high school, which Satou doesn’t seem to feel the least guilty about. To counter this, the extremely abusive female classmate Shiraume Ume appears, who doesn’t like Satou messing with “her” Oshiroi, and to discourage it she frequently slaps the utter crap out of him (see illustration), all the while rigging the upcoming school president election in her favour. In addition to this control freak, poor Oshiroi has some additional quirks: she loves writing homoerotic fiction, and her reason for approaching the half-priced box lunch battles was to gather material for her stories, in which Satou happens to become a prominent character.

The joy of good food plays quite a big part in Ben-to, and every time the main character puts something in his mouth, a lengthy description of the taste follows. The veracity of the author’s claims that these meals are extraordinarily delicious is a bit doubtful, but it does add an amusing edge to the writing, and grows into an important plot point later on, as Satou struggles to understand why the same type of food can taste so differently depending on how it was acquired.

“Do you think of half-priced box lunches as nothing but old left-over food that didn’t sell?” asks Yarizui.
“Not anymore,” is the answer I can give after finishing the first volume of this very original series. More than just being an action comedy, Ben-to explores the urge in humanity to find a meaning beyond peaceful existence, and tries to find the sense of achievement that comes from hunting and farming your own food, a process that’s been lost in modern society. To do so within the confines of a supermarket is, I think, very impressive. Despite the slow start, I was in love with this book when I finished the last page, and rushed off to buy the latest volume. Only 3 parts are out so far, but hopefully there’s more to come. With a concept this weird, I suppose it’s unlikely that it will get animated, but then I remember Akikan, so who knows. I just pray the action would get a proper animation budget.