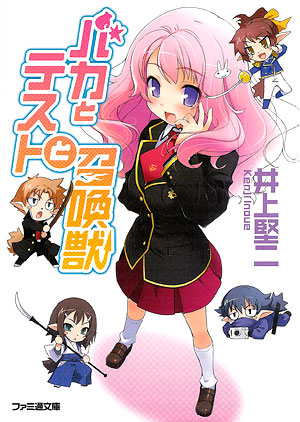 This thing won an award, you know. I’m sure that’s supposed to count for something, but the award system for light novels never made much sense to me, since it seems they’re usually given to the publisher’s own works, which makes it feel like a “Look How Awesome Our Shit Is!” award more than anything else. Maybe I should convince Omni to give me a Random Curiosity Best Light Novel Blogger Award, narrowly beating out… myself?

Authoring the novel series is Inoue Kenji, and this particular volume is his debut work. It’s a pure comedy, and a popular one at that – Kono Light Novel ga Sugoi! has the title skyrocketing from #8 to #3 in the past couple of years, and a manga adaptation started in the June issue of Shounen Ace. On top of that, there’ll be an anime version some time this winter. Illustration of the light novels is handled by Haga Yui, a lady who’s otherwise drawing a manga called Lotte no Omocha!, a fact that’s supported by the very nicely done colour manga introduction to the light novel. The grayscale illustrations inside are equally well made, with good use of shading to create a high quality effect.

“Get to the plot already!” I can hear you cry.
There isn’t one. Not much of one, in any case: idiot student Yoshii Akihisa attends Fumizuki Academy, a high school where an experimental system is in place. At the end of every school year, all students take a final exam, and based on the total score gained, each student is placed in classes A through F, where A class students are brilliant, and F class students are more likely to chew on their own snot than read a book. Not unexpectedly, our protagonist is placed in class F. However, not every student who ends up here is retarded. Innocently sweet genius girl Himeji Mizuki is hit by a fever during the exam, resulting in her getting a zero. Then there’s Sakamoto Yuuji, a childhood prodigy who lost interest in studies and now coasts along, somehow keeping Akihisa company at the bottom.

Very original, so far. A side effect of the class ranking system is that each rank gets custom school equipment, with A being given liquid crystal display desks and individual air condition systems, while poor F has to put up with sitting on floor cushions, rotten tatami mats, and spider webs filling up the corners of the classroom. Thinking this unfair, class F’s leader Yuuji persuades his classmates to take advantage of the school’s arcane rule set and challenge the A class in battle, where the winners get to switch equipment with the losers. These wars are fought using specially summoned mini versions of the students themselves, where the life bar is based on test scores in a particular subject. When a summon runs out of health points, the student has to sit in detention, but it’s also possible to flee the scene of battle, and instead replenish lost life by retaking the test. Obviously the lowly F students stand no chance against the mighty students of class A? Well, that’s where Yuuji’s tactical genius comes in. At least that’s what he makes his fellow classmates believe, and so the war is on. 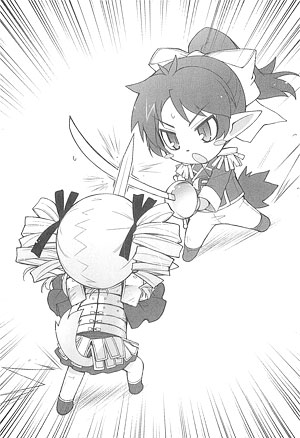 Summons? Is this a magical fantasy land? I’ve no idea, dear readers. It’s not entirely explained how these mystical creatures appear, only that a teacher has to be in the vicinity for the summon to work, and that a glowing circle shows up on the ground. Maybe there’s an advanced holographic physics manipulation device hidden in the school basement. It doesn’t really matter, because the plot is irrelevant. This series is all about the comedy, and as much as 90% of the text in the first novel is made up of dialogue. This makes BakaTest a swift read, and it may be a good starting point if you’re thinking of leveling up from manga reading. Up to half a page can be filled with RPG-like battle statistics, making the text even sparser.

This is a funny book, admittedly. Few are the occasions when you will stop smiling, and perhaps only because you’ll burst out laughing. But that’s also all it is. The grandmaster of comedy novels is Terry Pratchett, who has been making me bend over in laughter cramps with nearly 40 novels in the Discworld series the past 15 years, and what truly makes his work stand out is that it’s backed up by an interesting plot, fascinating characters, and some serious bits that make you stop and think. Consider the sine wave; there are ups and downs on the funny meter, and I think it’s because you can sense the difference between the joke’s peak and the drama’s dip that the real comedy is brought out. As an example we have Toradora!, where the relationship drama gives depth to the hilarious moments. Yet in BakaTest, there’s only fluffy humour covering every step of the way. It’s funny, and sometimes very funny indeed, but there’s nothing much to support it underneath.

Personally, I crave more when I have a book in my hands. This is a sitcom that will make you giggle, but unlike the previously reviewed Ben-to, you’ll find no insights to muse at the end. While it doesn’t happen often, it’s possible that BakaTest can turn out a better anime than it is a light novel, because the 24 minute format and visual aid will improve the comedy, the cuteness, and overall experience that this brand of humour can provide. At least it will be easier to sympathize with Akihisa’s reluctant attraction to the exceptionally beautiful trap.