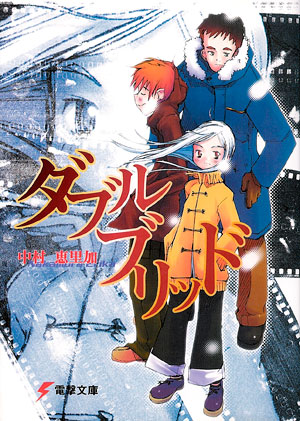 I have been deceived! The internet told me this was a great series, so I took the plunge and purchased four whole volumes in one go, so I could enjoy a long stretch of splendid literature, allowing the marvellous story to grip my heart, and the fabulous characters to captivate me. But no, not this time. They all lied. I have slogged through the first book, and now I am here to warn you. Don’t repeat my mistake; let me be the last victim.

It all started some ten years ago, when Nakamura Erika submitted her work for the Dengeki Novel Prize, and managed to steal the Gold Award, resulting in Doublebrid being published and eventually turned into a series of ten novels, which was concluded with a final novel just last year, after a strange five year break. The illustration was initially done by Fujikura Kazune, whose not too exciting art suddenly got replaced in volumes 3+, hopefully for the better. I feel a bit guilty typing this, since Fujikura died in a traffic accident on Valentine’s Day of 2001, but I’m hardly to blame for the truck that rammed her car.

The setting takes us to an alternate version of earth, where strange creatures were found around the world in the 1950s, possessing abnormal shapes and powers, and carrying DNA completely different from other lifeforms on the planet. In Japan, these became known as the ayakashi, and further split into classes A and B depending on whether they were human-shaped or not. With Japan’s reputation for loving outsiders, it comes as no surprise that they were the only nation to give A class ayakashi official status as citizens with human rights, and as such they’ve now managed to integrate with society to some degree. The main character is one of them: Katakura Yuuki, a young lady of 25 years, who as a sergeant at the Sixth Investigation Division — a section consisting solely of ayakashi members — works closely with the Emergency Arrest Team (EAT) to capture (or kill) more hostile ayakashi.

One of EAT’s newer recruits is the cocky, young Yamazaki Taichirou, who thinks it’s an insult that they should need the help of monsters to accomplish their tasks, but his intrepid attitude toward ayakashi is also what makes his boss decide he’s the right guy to transfer temporarily into the 6th to really get to know Yuuki and bring him around to how nice they can be, and perhaps create a better working connection between the units. Thus assigned to support Yuuki, the two eventually work together to track down a dangerous escaped mass murderer named Takahashi Kouji. Kouji is a rare doublebrid, the mixed child of a human and an ayakashi, and carrier of double DNA sets (double + hybrid!), giving him incredible survival abilities. After years of torture as a test subject, he’s now out with vengeance in mind for the woman who caught him — white-haired Yuuki.

Sounds decent enough, doesn’t it? Superpowered mutant investigations and xenophobic political machinations in a troubled society! And the characters aren’t too bad, with Yuuki conveniently stuck with a 16-year-old’s visage due to her genetic peculiarities. The trouble is, it’s not enough. While the writing is generally quite pleasant, the narration is appalling. In order to convey to the reader how the characters think and feel, the author uses an omniscient point of view that simply explains their emotions and reactions, straight and clear. Where other works of literature will go through the trouble of expertly using dialogue and descriptions of behaviour, in Doublebrid we just peel off the skull and reach into their brains to list exactly what’s going on. It’s cheap, to be honest.

With the way I’m told straight out how the guy changes his mind upon hearing her say something, I’m struck by how artificial everything is, and it becomes impossible to feel any kind of bond with these people. This novel clearly wants to focus on the emotional development and growing mutual understanding between Yuuki and Taichirou, but the manner in which it’s told is so forced it feels like I’m reading a cheat sheet. When the narrator has no restrictions on how deep into every single mind it can go, “plot” becomes meaningless. Either we see it all plain as day, or the author has to exclude important details in a stupid fashion that becomes offensive. Nothing is left for interpretation, and it ends up a dull recounting of event after event, with an inevitable conclusion seen from miles away. I won’t say this book is bad, but at the same time it has a very long way to go before it arrives at good.

Note: After finishing Doublebrid, I started reading a book called Nishi no Majo ga Shinda (The Witch of the West is Dead) by Nashiki Kaho. It’s a proper novel without illustrations and manga faces that was turned into a live-action film last year, boosting the book’s popularity even more, and it’s now sold in excess of a million copies. However, since it’s not a light novel, it doesn’t fit into the scope of this section, so I won’t bore you with a review! Expect my next entry to be delayed while I finish reading this, and try to figure out what to pick up afterwards.