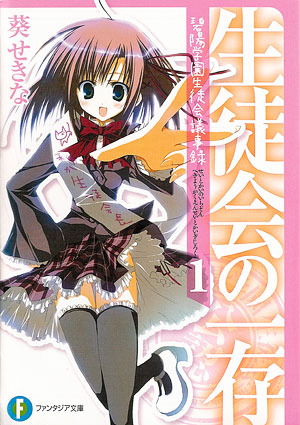 In 2006 there was a light novel series called Material Ghost, which was runner-up for Fantasia’s Novel Prize, and marked the debut for author Aoi Sekina. It may have been very good, but I will never find out. After what he felt was a rather grave series about suicidal people and ghosts, the choice was made to take a lighter, happier direction with Seitokai no Ichizon. It seems to have worked, because the series burst in at #7 on the Kono Light Novel ga Sugoi! 2009 list, and after a couple of manga adaptations, it will now be animated and broadcast on October 2nd. The illustrator responsible for the various inserts and covers is a lady called Inugami Kira, who’s also been making games and drawing the H2O manga adaptation. No doubt the idea is that the reader should feel an attraction toward the girls’ designs, but I got stuck wondering why everyone has cactus hair.

Seitokai no Ichizon is — in the words of the author himself — a gag 4-koma light novel series, written as a meta-novel. That means the fictional characters in the book write a fictional novel about themselves, including fictional afterwords, followed by the real afterwords. The brunt of the book is made up of individual chapters of around 25 pages each, where the five main characters sit in a room and discuss various topics chosen by the student council president. These five are: student council president Sakurano Kurimu (cute loli type), secretary Akaba Chizuru (cool beauty type), vice-president Shiina Minatsu (sporty tomboy type), accountant Shiina Mafuyu (sweet and shy type), and finally the guy who’s decided they will all be part of his harem — vice-president Sugisaki Ken (perverted otaku protagonist). So far all he’s getting is tsundere reactions. 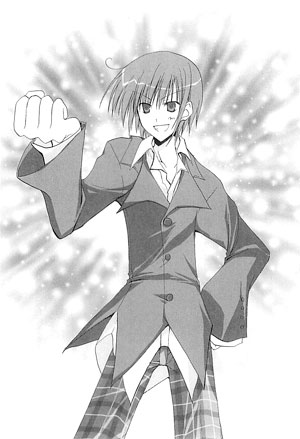 Excited yet? You shouldn’t be, because Seitokai no Ichizon is utter crap. I’ve racked my brain for a book I’ve read in my life that was less entertaining than this, and I came up blank. As previously noted, it’s primarily a comedy, and I require one small thing from comedies: laughter. This book failed to deliver every single time, line after line. It’s 270 pages of painfully lame jokes, where the author is pitifully trying to be funny, and all you can do is cringe at how insanely bad it is. Getting through an entire novel like this is a feat to be proud of, but there’s no reward at the end, just an empty feeling of having wasted hours on filling your mind with vacuum.

They say a really good book will make you think, lingering in your mind as a tiny seed, generating new ideas. In that respect, Seitokai no Ichizon is perhaps a masterpiece, because it’s the first time I’ve felt forced to truly contemplate what makes a joke funny. Not that it led anywhere. In the end, all I can say is that appreciation of humour is very individual, and this novel didn’t work for me at all. It shares a surprising amount of elements with Nishio Ishin’s ongoing anime adaptation — harem, otaku-centric humour, focus on dialogue — but where Bakemonogatari is outrageously hilarious and witty, the attempts at jokes in Seitokai no Ichizon fall absolutely flat. In part it’s probably because the author never manages to be clever, instead resorting to straight references to popular titles like Suzumiya Haruhi and Higurashi no Naku Koro ni. This blatant way of pointing at something that’s genuinely good, in the hopes that recognition itself will be enough to be funny, reminds me of the catastrophically awful Hollywood film Epic Movie.

Admittedly the meta-bits don’t help, because I generally loathe that kind of comedy. While the addition of the president’s written comments at the end in theory could serve to bring the novel another dimension of understanding and emotional connection to the protagonist, in reality it just comes off as being a rambling apology for how terrible the book has been. As if the character’s good-hearted modesty would excuse how boring it is to read. Sorry, Aoi-sensei, your tricks don’t work on me; I still hated this book.