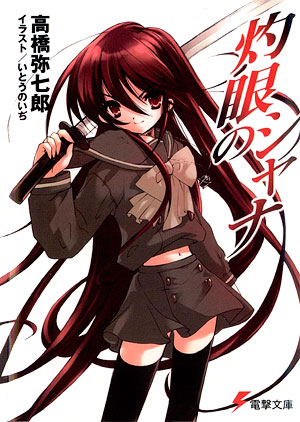 It’s been a long month. Normally I’ll finish a book of this size in around ten hours, give or take a few depending on language level and page count. In the case of Zero no Tsukaima, the span of an entire novel can be cleared in one or two days’ time. With this first volume of Shakugan no Shana, it took me a full month. I know you’ve been worried in my absence, but there’s no need; I’m back now. I have served my time. And I can finally taste freedom again.

It’s futile to introduce Shana, since everyone and his grandmother knows about the series already, but for the sake of completion, I’ll do it anyway. After winning the Dengeki award and debuting with A/B Extreme in 2002, author Takahashi Yashichirou decided to write something easy to understand, and really hit the jackpot with Shakugan no Shana, which has been one of the absolute top sellers of this decade, amassing sales in the region of 6 million copies across the 18 volumes of the main story and several spin-offs. Amusingly, Haruhi is very close behind in terms of sales, and a factor they have in common is that Itou Noiji handles the illustration. Whether she’s the goose that lays the golden eggs, I’m not so sure, but her special brand of characters has certainly contributed to the massive popularity of the anime that popped up in 2005, and its sequel in 2007. In addition there are several games, a manga, a movie and whatever else you can think of, combining into a gigantic franchise.

The very first volume opens with protagonist Sakai Yuuji being eaten by a monster and thereby dying a horrible death. The end! But no, it turns out he’s actually a special Torch called a Mystes that carries a Treasure Tool, which means that the Midnight Lost Child within him keeps regenerating his Power of Existence that the evil Rinne sent by a Crimson Lord from the alternate world of the Crimson Realm wants in order to perform a Power of Unrestraint, and while these energies are being devoured in the temporal confinement Seal, the Flame Haze named Flame-Haired Red-Hot-Eyed Hunter Shana appears, carrying a necklace known as Cocytus, allowing Flame of Heavens Alastor to speak, and wielding the mighty sword Vairocana of the Offering Room, Shana rescues Yuuji, and the story of their romantic undulation can begin.

Oops, I spoiled it a bit there, didn’t I? But you already watched the anime and knew everything in the above paragraph, so I won’t apologize. The point I’m trying to make here is that the only way you can get through Shana is by keeping a special Shakugan no Shana dictionary at hand, or you’ll be lost or bored or probably both, as in my case. In fact, I gave up on the anime after four episodes, because of all the jargon. Yes, I am a fool of the highest order, but I was hoping the books might be better, and that the terms would be less confusing in writing. I was wrong, of course, because it’s much worse.

Yuuji spends half the book not wanting to die, and he moans and moans and it’s gloomy and dreary and incredibly boring. In the meantime, Shana explains what all the strange words mean, which is marginally more entertaining than studying for a history exam. Throughout, there are hints dropped that Shana and Yuuji might be falling for each other, but it’s constantly pushed back by the use of violence (Shana beating Yuuji), or insults (Yuuji calling Shana’s figure childish). This is a bit awkward, because Shana is described as looking like she’s 11 years old, yet Yuuji keeps thinking she’s beautiful whenever he catches a glimpse of her naked. He’s 15, though, so maybe that’s okay? Let’s see, the lower dating range is supposed to be Age/2+7, so that makes 14.5… oh shit! 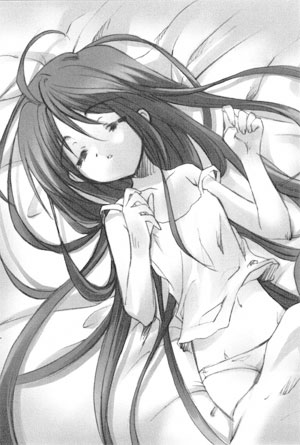 Right, setting aside the pedophilia, Takahashi has a terrible habit of stuffing commas into his sentences. I’m decently fond of commas, admittedly, because they can be used to create a nice reading rhythm, or clear up long and complex sentences. However, Takahashi seems to think they’re some sort of magic literature tool that transforms your prose into shiny diamonds. The result is an incredibly annoying experience of reading two words, pausing mentally, then reading two more, pausing, reading a bit, pausing, and then you finally reach a blessed period and can attempt to extract the commas and parse it as a proper sentence. I’m surprised his editor didn’t strangle him after the first chapter, because I definitely would have.

It’s not all bad, unfortunately. I say unfortunately, since it would have been nice to be able to sum it all up as “Shana sucks” and be done with it. Toward the end, Yuuji shows a bit of courage, a willingness to sacrifice himself for the greater good, and Shana’s mask splits for a moment to show some fondness for him, and the final battle is quite decent. Then there’s a romantic comedy element at school, providing a nice change of mood. The trouble is, I’ve already seen this. About sixty times. I know exactly how it goes, because the series is 5000 pages long and counting. There’s no way that this couple will actually develop a relationship in the next book, or in the one after that, or even the 15th part, because the author will drag it out and reset everything with a stupid remark from the guy, tearing down all progress as the girl rips his head off. It’s like reading Zero no Tsukaima all over again, and after enjoying Toradora! I simply can’t stand this type of endless tsundere loop anymore, because now I know how good it can get if they just have the guts to end the damned thing.

Perhaps I’m being unfair comparing Shana to Zero no Tsukaima, since Shana came out two years earlier, but it doesn’t matter much when Zero no Tsukaima does it so much better. It’s more fun, exciting, sexy, less obscure, and contains a nicely thought out plot that unravels outward into a huge intrigue as you get through the volumes. I saw nothing in Shana to make me believe there’s anything in future parts to involve me, and life is far too short to read two of these infinite series.