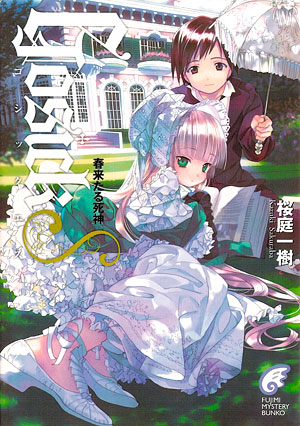 If there’s a “Dumbest Title” award, this one has a great shot at taking home the prize. It’s probably a pun on “gothic”, but as a Westerner, it just feels wrong to me. Go sick? What? At least this particular volume’s wacky name is mellowed by the poor little ‘s’ that follows it, indicating that it’s not a part of the series proper, but rather a collection of short stories that take place here and there on the time line.

The GOSICK series itself started with a standard length light novel back in 2003, and this first volume of the short story collections showed up in 2005, after the 4th regular novel had already been released. The reason I’m reading this one first is that the short story that starts it off is chronologically the beginning of the tale. Another reason is that it’s impossible to get a hold of GOSICK v01 at the moment, since it’s out of print, but the title seems to have been taken over by another label and will be getting rereleased later this month. This actually bothers me, because the illustrator involved is absolutely wonderful, with some amazing character designs throughout the book, and gorgeous covers. It’s been a while since I saw such cute drawings, and I’m worried she won’t return for the new batch.

The main character is a young lad from a certain (unnamed) island nation in the Far East, called Kujou Kazuya. It’s 1924, and as the youngest son and unlikely to inherit the estate, his father has deemed him expendable enough to be sent off to boarding school in a small (fictional) European country located between France, Switzerland and Italy. After accidentally running across a biker whose head falls off, he’s accused of murder, and ends up meeting an enigmatic little girl who solves mysteries to stave off boredom. The two develop some kind of relationship that may or may not be described as friendship, and many more adventures follow, as the corpses pile up around the school. I’ll pretend that her name is romanized Victorica (ヴィクトリカ). 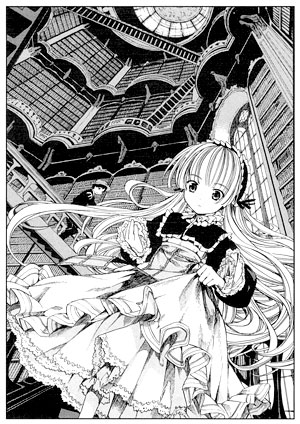 The genre appears to be mystery, but the reader is given no chance to puzzle these out for himself, and they’re not particularly engaging. Instead it’s the character interaction that keeps it interesting, with the overly serious Kazuya and infinitely stuck-up Victorica warming up to each other’s company. Victorica is a peculiar creature, described — in exactly the same way no less than five times over the course of this volume — as looking just like a doll, with blonde hair and exquisite features, which in combination with her attitude makes her hard to separate from Rozen Maiden‘s Shinku, but I suppose their eye colours differ.

It’s hard to say if GOSICKs is the right entry point for the series, because while it does give us the protagonists’ very first encounter, the short story format breaks things up too much, and Sakuraba never manages to create a plot that feels intriguing. They’re just brief glimpses into the lives of previously established characters, and no doubt more amusing to those already familiar with them from the earlier books. With so many minor mysteries, it mostly comes across as an endless exhibit of how brilliantly superior Victorica is. Even so, there’s a cozy mood seeping through that makes me willing to give the series another try with the first volume of GOSICK, once it’s available again.

Note: Part of this series has been translated and released in English, available at Amazon.com. There are also several volumes out in German.