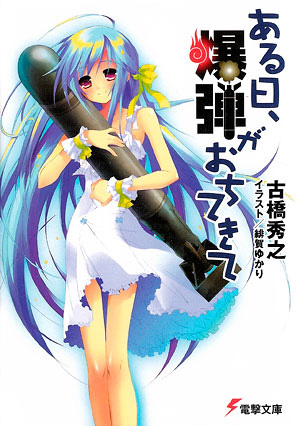 Importing books is expensive, so in order to keep shipping costs down I always try to buy at least ten books at a time. However, finding ten interesting titles can be a difficult task, and sometimes I end up throwing dubious novels on the pile just to pad the numbers. One of these was Aru Hi, Bakudan ga Ochitekite, a name I only vaguely remembered having seen somewhere, but its meaning — One day, a bomb came falling down — got my imagination going, pondering what kind of missile it could be, and how the victims of this explosion would be affected. It was nothing like I imagined.

Furuhashi Hideyuki is somewhat of a veteran, having published his first novel Black Rod back in 1996, which won him the Dengeki Novel Prize. He’s followed it up with more than a dozen works (including Demonbane novelizations), but there seemingly hasn’t been much published after 2007. The illustrations were made by Higa Yukari, a woman whose work on the Lyrical Nanoha Force manga may be familiar to many. She’s also drawing some sort of manga version of Kiddy Girl-and, the upcoming sequel to Kiddy Grade. Personally I find the illustrations in this novel to be a bit wonky, but if the images on her website are anything to go by, she’s improved since then.

I started reading Aru Hi… like any old novel, but was stumped when after 50 pages, a new chapter appeared with an entirely new main character — despite being a first person narrative. That’s when I realized it wasn’t a full length novel, but rather a collection of short stories. Unlike the recently reviewed GOSICKs, where the short stories were about the same characters living through new events, the short stories in Aru Hi… all have completely different characters and settings, but these are bound together by a common theme: time. Ended time, reversed time, looped time, time length, swapped time, time difference, and time jump. 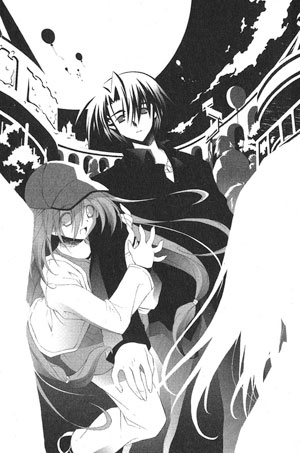 These seven tales aren’t all good, but there are true gems among them. My favourite was the second, where a high school boy is tasked with taking his childhood female friend home, since she’s caught the “idiot cold”. It’s a temporary infection that causes her memory to leap back a few years whenever she sneezes, effectively making her believe she’s younger, because she has no recollection of later events. Thus she moves closer and closer to infancy as the two walk homeward. While it may sound like a journey into pedophilia, it’s nothing like that. The beauty is in how this setting is used to gradually disclose details of the girl’s life, and the relationship between her and the narrating protagonist.

The short story is a fascinating format. There are authors who spend dozens upon dozens of volumes trying to tell their stories (Zero no Tsukaima comes to mind), describing every minor event and filling thousands of pages. Yet this book contains examples of stories told in under 50 pages, which have just as much emotional impact. And depth, because whereas recounting everything in utmost detail leaves nothing for the reader to imagine, the big, rough strokes of a short story will create gaps that your own imagination can fill, increasing its reach far beyond what is written. These short stories are like snowballs; an idea that rolls around in your mind, picking up thoughts and emotions, growing until it comes tumbling down like an avalanche. Furuhashi’s words guide you, but as a reader you take part in the tale’s conception.

Aru Hi… closes with a thought-provoking story of a young woman who stands in the middle of a park, frozen in time like a monument to a war many years earlier. She was at the focal point of a spatiotemporal tidal bomb’s detonation, which wiped out the entire city around her, but her position in this perfect eye of the storm left her stuck in a bubble where time has slowed down to 1/6000000000th. While life outside the bubble has moved on 60 years with the city rebuilt, to her no more than 0.3 seconds have passed, as the seasons flicker past before she’s even managed to blink. Intrigued by this “girl in amber” is our narrator — a boy whose thoughts and choices end up touching us, but along the way we’re also gifted with an opportunity to fantasize about what it must be like to see civilizations flash away one after another, unable to move and all alone.