I never so much as imagined that a casual remark could lead to the fulfillment of a dream, but here I am, still pinching myself every few minutes to make sure I’m not making it up.

My experience with anime has been a deeply personal one. I was a sheltered child whose television programming was carefully controlled in order to weed out “bad influences”, so my first true encounter with anime came one day in the eighth grade, when one of my teachers decided that it would be fun to watch the original Fullmetal Alchemist in class. Never before had I been exposed to something that mature and thought-provoking outside of books, and Hylia-be-damned, I wanted more. It wasn’t long after that I discovered the internet and its proliferation of anime.

In 2006, a year that marked a very difficult time in my life, I stumbled upon Eureka Seven. I found myself in the characters and themes in a way I never had with any other work, and suddenly the crushing depression that had driven me to some very dark places began to dissipate. The experience was so powerful that some six years later, I’m still watching E7 at every opportunity, despite having seen it over thirty times.

Last year, I accidentally found Random Curiosity. Having been so influenced by the art form of anime itself, I was struck with awe at the quality and level of discussion each writer brought to their work, and I found myself drawn to the idea of writing. That’s how my own personal blog, The Limit of Questions, was born, though it, and I by extension, are far from the ideal quality that RandomC stands for in my mind. 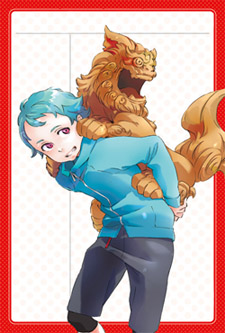 That’s why I was utterly shocked to find that my remark to Seishun last week about my dream to write here led to Stilts-senpai asking if I’d be interested in actually taking up a position. While I still have doubts as to my ability, I somehow worked up the courage to go for it, and thanks to this amazing opportunity, I’ll now be picking up coverage of Hataraku Maou-sama! and Karneval this Spring.

As to my tastes, I don’t really have any; in general terms, I will watch any genre, and I base my judgments not on content, but on thematic analysis, execution, and simply how much fun I have watching something. Here’s my MAL for reference, though I tend to score based on whims and am always horrified to find Series X scored higher than Series Y a few months later.

Apart from blogging, I’ve been translating manga on and off for years. I’m currently working on various Japanese-only releases of Eureka Seven material, though I’ve considered translating the Shin Sekai Yori novels if the official publication doesn’t happen.

In any case, I’m incredibly thankful to Divine and each and every writer here for making RandomC such a wonderful place, and I’m especially grateful to Stilts for taking the time to talk to me, encourage me, and put up with my overly flowery writing and ignorance over the last few days (I’ll give it my best, Senpai!). I know that a lot of sad changes have happened lately, but I still hope to contribute a little bit to what makes this site so great. With that being said, I’m ecstatic to be here; Random Curiosity truly is the stuff of a blogger’s dreams, and though I’m coming on board a bit late in the season, I look forward to interacting with you all from now on!