Okay, okay, this isn’t really a news-related editorial (even though I promised I would write them soon), but this is recent, and it’s probably going to storm across anime fandom on the internet, so I might as well respond to it here.

Watch the video before reading the following.

However, there are definitely some gray areas which OtaKing completely marginalizes (arguably, because he has to since he used the video editorial to make a point). While overly literal and sparsely localized translations are part of the weaboo culture of Japanophiles who like to intersperse Japanese with English (i.e. “That’s so kawaii!” or “You’re a baka!”), it is also an indication of someone who knows just enough Japanese that they do not want a jarring experience when reading a subtitle. Take for example how Japanese is “backwards” relative to English, both in the order of names and basic sentence structure. When a character says “Hirano Sakura desu” (a modified example from OtaKing’s video), it can be unsettling to read a subtitle that says “I am Sakura Hirano.” Potentially, even a person with no knowledge of Japanese would be able to recognize the sounds/syllables and realize that a set of them have been reversed. This is similar to the rewriting necessary when doing a dub (so that the words match the lip flaps); enjoyment of the show can be lost when a viewer feels something is amiss. Of course, a translator can take things too far and turn everyone into Yoda by being too literal with the translation: “Hirano Sakura I am.” This was the point OtaKing was trying to make with less obvious overly literal translations like “Even at a time like this.”

I also agree that it is contradictory to REGULARLY write out “onee-sama” or “onii-chan” in the subtitle while refusing to REGULARLY denote the differences in “boku” and “ore” when a character says “I,” not to mention all the different ways of saying “you” in Japanese. OtaKing criticizes the fansubbers for not working hard enough to be creative with their translations to get around such difficulties (and then uses an interesting example from Escaflowne to show how “Who the hell are you” and “Who the heck are you?” can denote the difference in harshness between “kisama” and “anata” and carry across the effect originally intended without just leaving it in Japanese). However, creative translations can only go so far. There are definitely times when the choice to use such Japanese words are a part of the story and MUST be pointed out. Plus, when it comes to idioms or language/culture-based jokes, the task of creative translations can be downright impossible. While I give great kudos to ADV’s work on Azumanga Daioh and its ability to culturally translate one of my most favorite jokes in the series (Osaka’s “Trivial/Bean Knowledge” into equally funny “Grains of Truth” joke), an unpaid and admittedly amateur translator doesn’t have the time and resources to consistently pull off something like that.

In regards to on-screen text, translation notes, and translation of signs, I agree that too much clutter can take away from an anime. If you can’t appreciate the serenity of a peaceful scene or follow the action of a fight scene due to the letters and characters flashing across the screen, then the subtitles are being done wrong. I did, however, have a problem with how OtaKing used examples from fansubs of Pani Poni Dash and Sayonara Zetsubou Sensei to validate his points here. In the original Japanese, there is a flurry of text that whizzes by at breath-taking scene, typically on a chalkboard (an identifying feature of many SHAFT studio works), such that a native Japanese viewer would have a hard time following it all. To me, the fansubbers were trying to reproduce that experience (a big point that OtaKing makes is that a translation should give the audience an experience as close as possible to the original). Sure, it becomes difficult to follow, because you are reading the spoken dialogue AND the original on-screen text in subtitles at the same time (I guess the only real way to solve that is to make a dub). However, a lot of good, hard work was put in by those fansubbers to offer the same effect to English anime fans that the original Japanese viewers had. Such fansubs (particularly a.f.k.’s fansubs of Sayonara Zetsubou Sensei) would go so far as to composite English text directly over the Japanese text as a professional company might do. And if they weren’t composited, the good fansubbers try to insert the English text in as unobtrusively as possible, for which OtaKing criticizes them by questioning if the sign with original Japanese writing had English writing in it originally as well. 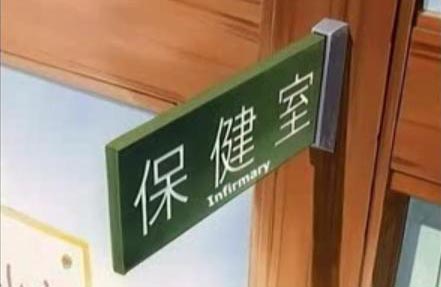 I don’t see anything wrong with this…

In fact, when pontificating how fansubs should be more professional, OtaKing somewhat contradicts himself in the comparison of the actual typeset versus translation. He makes a point that using small, unobtrusive text at the bottom of the screen provides a much better experience for the viewer, but not only that, it’s more professional AND LESS WORK than the colorfully distracting karaoke and special moves text made in Adobe After Effects. However, being more professional in the translation by localizing culture references and idioms to English requires MORE work. Still, if I look at it more logically, OtaKing is really complaining that fansubbers are willing to do more work to do something they want to do (make flashy texts that show off their computer graphical skills and are more easily recognized by the viewer) than to do something they don’t want to do (write a professional translation that won’t be recognized, since professional translations, according to all the academic sources OtaKing referenced, are SUPPOSED to be invisible and unrecognized).

Let’s be honest, folks: that’s just human nature. People are always willing to do more work for what they like than what they don’t like (after all, here I am putting off grading papers in order to write an editorial on an anime blog). So what’s the problem? Fansubs are free (at least they’re supposed to be), so why complain about what they’re doing? I remember in the early days of digital fansubbing that some groups would get completely lambasted for having poor video quality (it still happens today, I’m sure). My argument was (and still is), “You get what you pay for.” In addition, a small part of me thinks a “poor” fansub can be a good thing – it gives people a taste of the anime and possibly encourages them to buy the DVD. Don’t want an opening filled with fansubbers’ names, karaoke-effects, or even the credits for the original creators? Then buy the DVD with a clean opening. 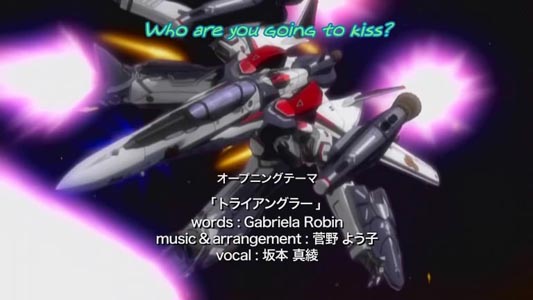 I can’t wait to watch a clean opening of this!

Still, there is a bigger issue here that OtaKing did not even address in his video. This “cultural movement” is affecting the industry. Look at the commercially localized manga and anime of today and compare it to 8 years ago. The proliferation of retaining Japanese idiosyncrasies has been on the rise, from the preservation of right-to-left reading in manga to the use Japanese honorifics in a dub (like in Azumanga Daioh) — A DUB!. If OtaKing really has a problem with cluttered on-screen text, then he should check out the commercial release for Excel Saga with the AD-Vid notes turned on (granted, as a commercial DVD, one can turn off all those texts – I guess, one can make an argument that fansubbers should create a matroskva pack that allows their fansubs to have certain on-screen text, karaoke, and translation notes turn-off-able…). This is nothing more than economics at work, actually: there is a market for weaboos, and anime FANS should be happy that the anime industry is the one of the most responsive industries to their consumers out there. However, this market is somewhat gradually taking over, and that does not bode well for the industry. Allow me to explain.

Basically, there are three markets the anime industry is trying to target: fresh blood (people who have little to no knowledge of Japanese language, culture, and/or anime), FANS (people who have some knowledge and/or are overly excitable about anime or anything Japanese), and mature fans (people who have extensive knowledge and/or are mature in their views of fandom). Only FANS desire the “authenticity” of retaining honorifics, name order, and Japanese words that do have a decent English translation (i.e. shinigami can mean reaper). Fresh blood don’t know any better, and mature fans can deal with it, because while they know how it was “supposed” to be, they can understand why the translation went a particular way.

Not only do we have a “numbers dilemma” going on here (where potentially only one out of the three groups is selected for when producing localizations of anime), but that particular demographic group of FANS routinely refuses to pay for commercial anime in the first place! They get everything they need out of fansubs, and they revel in their cliquey obtuse weaboo culture. The anime industry cannot sustain itself on a group of people who are only interested in anime because it’s different and allows them to speak in ways that alienates everyone (actual conversation overhead at an anime convention: “Wai! Tobi-chan! I’m so happy to see you! You’re SO kawaii in that cosplay!”), because eventually such a group (which was undoubtedly be small to begin with) will lose interest and focus on something else that is different and clashes with social norms. This also explains why there are always such huge reactions from FANS to the professional translations and localizations that OtaKing advocates: they don’t want their underground hobby to become mainstream. I’m sorry, but one should not like anime SOLELY because it’s different – that’s what we’d call a fad.

But maybe I’m being overly paranoid. As a teacher, I’ve witnessed firsthand the assimilation of all things Japanese into the youth of today. Ironically enough, maybe the integration of Japanese and English (both language and culture) will become more mainstream in and of itself, and that will generate a demographic large enough to sustain the industry that produces the wonderful entertainment we enjoy. I mean, it’s not like the anime industry is in trouble…or is it…?

– Natron-e?
who is enjoying roasting some popcorn over the flame fest