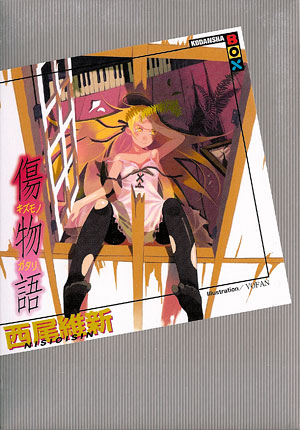 After taking a little break from the Bakemonogatari series, reading a few books by other authors, I finally dug into Kizumonogatari, which is the third novel about Araragi Koyomi. It took no more than two sentences to get back into the groove.

While Kizumonogatari was published 18 months after the first two volumes, it’s actually a prequel taking place over the spring break, about a month before Koyomi meets Hitagi in the first arc of Bakemonogatari. As a consequence, most of the girls introduced in the previous books are completely absent from this one. Knowing this I was a bit apprehensive, thinking it would lead to less opportunities for the dialogues that make Nishio’s writing so great. In my previous review I also voiced complaints about how battle scenes left me cold, and it was clear at the outset that this volume would contain more action than the other arcs.

Surprisingly however, Nishio seems to have levelled up his writing skills between books. Rather than being tedious, the fight sequences in Kizumonogatari turn out to be the highlights this time around. They’re genuinely exciting and suspenseful, thanks to being more roughly described, allowing me to paint the scenes vividly in my head, instead of stumbling over every single fixed movement. It’s remarkable how he manages to keep readers on their toes, regardless of the fact that we know the precise outcome from Bakemonogatari. It’s easy to believe the story this time will feel repetitive because so much was hinted already, but this is no mere recap.

In Kizumonogatari we find out all the details about Koyomi’s dark encounter with the supernatural that changed his life. It starts out telling us how he becomes friends with Tsubasa, and how she mentions a rumour that you might run into a vampire if you’re out at night. Koyomi finds out just how truthful it is when he’s on his way back from the bookshop past midnight and sees a beautiful blonde woman under a streetlamp. She has no limbs — both arms and legs have been torn off — and cries out to him for help. Her name is Kisshot Acerola Orion Heart-Under-Blade, and her predicament leads to Koyomi duelling three vampire hunters to get the extremities back, meeting Oshino along the way.

Shedding off the other characters actually results in a greater focus for this arc, raising the quality even higher than before. Tsubasa gets a lot more space, fleshing her character out to become my favourite girl in Koyomi’s “harem”, and it’s fascinating to see what kind of person Shinobu was before she turned into an empty husk. Compared to Bakemonogatari, the balance is a lot better here, with plenty of time for the plot to develop, making it a more cohesive story overall. I would confidently state that Kizumonogatari is the best part (so far), but blemishes still remain to be polished.

Some 275 pages into the book there’s a turning point, and Koyomi suddenly becomes an irritatingly whiny emo. It doesn’t last very long, but it feels like an eternity to wade through. Up until the finale I had also been happy about the absence of tiresome explanations from Oshino, but this hope too was smashed, as the last battle is interspersed with helpful elucidation on details the reader might have missed, had they not already been noted so many times before. I believe dropping this obsession with hammering the point would improve Nishio’s authorship immensely.

In the afterword, Nishio says it is possible to start the series by reading Kizumonogatari, since it’s the proper chronological order. I wouldn’t recommend it, though. The first books felt deeper for the mystery added through not knowing anything about the vampire incident, and this one is all the more thrilling for finally exposing a hidden mystery. No matter what order you choose, the Bakemonogatari series is a fantastic experience by a magnificent author. Some people have the gift of knowing how to paint a complete character with a few deft strokes, but I think it’s equally impressive to see how Nishio manages to create genuine, real characters by using every last stroke of his brush. It’s so damned intricate, yet never feels contrived.