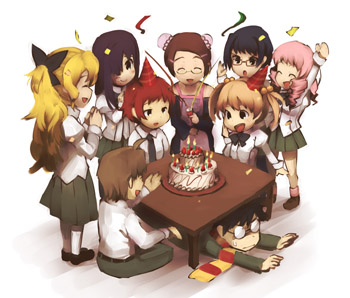 tssk…at first I was going to write my introduction as a bunch of lyrics mimicking COOLISH WALK (Working!!’ OP), but then I realized it was already midnight. I’ll spare the awkwardness for another time…another post :3.

‘so, I am Zanibas, one of the new writers! Some of you may recognize me, as I’ve been on and off of RandomC for years now, all the way back to when Omni was writing. Random Curiosity may be full of history, but I particularly remember Jaalin’s posts, whose semi-silly examinations of anime aspects were appealing (perhaps you’ll see a similar style in some of my future posts…). To be part of the blog that has introduced me to great anime is a HUGE honor, so let me say, “I am in your care, dear reader!” ^^’…please don’t hurt me >_< .

Coobie’s contract says I shall be a “specialty writer” who focuses on Romantic Comedies and obscure shows. Heard of Taishou Yakyuu Musume? Obscure and light on comedic romance, it’s one of the shows I often recommend. However, popular or obscure, you’ll see me hanging around these genres. As my first assignment, I will be covering the rest of Amagami SS+, starting with the 2nd half of Sae’s arc and then most likely pick up a romantic comedy for the spring. Comment if you have a recommendation!

In terms of my anime portfolio, romantic comedy has always been the dominating genre. I started off with Love Hina about seven years ago, then moved onto Chobits and Mahou Sensei Negima. Although Sakagami Tomoyo and Ushio from Clannad will forever hold a place in my heart, new challengers vying for a spot come every season! That doesn’t mean that I don’t watch other genres! This anime list probably illustrates it best.

Romantic comedy starts aside, I’ve found philosophical anime to be a good genre to watch. Kino no Tabi tops that genre in my opinion – it was a show that depended heavily on challenging the audience every episode, which made its emotional conclusion all the more striking. (I’ve never felt more bad for Kino than any other character.) Welcome to the NHK was also a great watch for refusing a happy ending and teasing the audience every episode. Lastly…Eve no Jikan..sequel plz. ;_;.

Nichijou, Clannad After Story, REC, Seitokai no Ichizon, Level E (the first 3 episodes, arguably the last 3), Hourou Musuko, Sora no Manimani, Elfen Lied, Colorful, Oreimo and Hare+Guu are some of my other favorites…though so many others are still on my waitlist…examples being Cross Game, FMA:B, Princess Tutu…

Outside of Random Curiosity, I attend the University of California, Berkeley as a student and undergraduate researcher. I am an open anime fan (Cal Animage Alpha shoutout!) who cycles through three anime tote bags to carry around textbooks. I’m majoring in Cognitive Science with hopefully another major in Computer Science. I also work as a volunteer online counselor on the topic of “crushes” *wink*. Anime/Vocaloids, Katawa Shoujo, the Japanese language, travel, and playfully wrestling with my floormates are some of my interests, but the thrill of trying new things is what I live for! Feel free to talk to me and say hello! If you’re curious about something, feel free to ask it here or ask me personally. I’m not a closed book, you know! ^__^ I also like to make references to a certain character. If you noticed the easter egg in this post and yell it out in the comments, I will love you…within my capabilities as a writer. :3

However, to conclude, I would like to say that I am truly excited about writing for this community. Perhaps one of the most supportive anime blog communities, if not the best, resides here, and I am grateful to work for such a group. As such, I highly value comments and discussion. The more you make your voice heard, the more it shall inspire my writing! Also, let’s be circle buddies!

I shall leave you with a quote from one of my favorite games, The Legend of Zelda: Skyward Sword, which I have reversed because I think sums up my feelings as of now.

…i think this feeling correlates close to what you humans call…

Our partnership is coming to a beginning, and even as we speak, i feel my desire to write waking up. Before I enter the blog that calls me to the pen, I wish to relay to you the words that i will record many times over the course of our journey. Many have said them to you thus far, but now i wish to say them for myself, before our journey begins…

P.S: Specifically, thank you Xumbra for encouraging me to apply :3, thank you Bucephalus ahead of time for not scoffing at me for this D:, and thank you again reader. Let’s get along, shall we? ^^